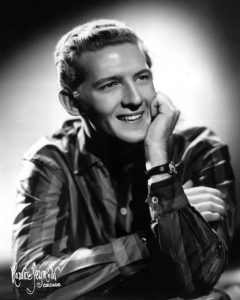 On this date in 1984, 48 year old Jerry Lee Lewis married his sixth wife, 21 year old Kerrie McCarver. At 20 years it would prove to be his longest marriage.

His first, when he was 14, to 17 year old Dorthy Barton, lasted 20 months. His second lasted 4 years. His third caused a scandal that almost cost him his career when he married his cousin, 13 year old Myra Gale Brown. His forth wife, Jaren Elizabeth Gunn Pate ended when she drowned in a friend’s pool, several weeks before their divorce was to be finalized. Number 5, Shawn Stephens, was married to him for 77 days when she died under suspicious circumstances.

Not to be outdone by Henry VIII, Jerry married his seventh wife Judith Brown in 2012. Mr. Lewis is a first cousin of disgraced televangelist Jimmy Swaggert and musician Mickey Gilley.